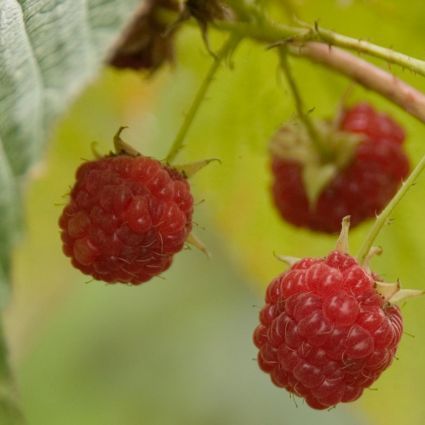 Caroline is a variety of everbearing Raspberry of exceptional quality. Plant a patch to eat fresh or freeze for later. You can even make some into jams, preserves, pies, cobblers and sauce...the possibilities are endless!

The new standard for fall-bearing Raspberries, your Caroline has far better flavor and much larger berries, making this Raspberry literally the one to pick if you're planning a new patch.

You'll be amazed at the productivity of your Caroline when you see your plants literally laden with fruit each year. Caroline ripens in late August, producing large, conic berries with a pronounced Raspberry taste well into fall. If you're in a warmer climate you can start picking these tasty jewels as early as June.

It's a hardy variety, able to fend off root rot and yellow rust better than Heritage, and that's just for starters. It's self-fertile, has good heat and humidity tolerance and deer tend to leave it alone.

Raspberries have become increasingly popular for their nutritional and antioxidant properties. They are a rich source of vitamin C as well as being high in manganese and dietary fiber. Eat them for both taste and health...and grow Caroline for one of the best varieties available for your home.