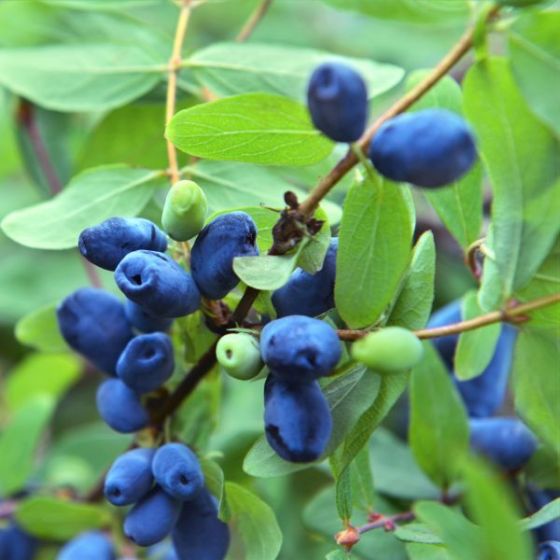 We were at a wedding recently where the talk at the reception wasn't about how beautiful the bride was (though she was) or how nervous the groom seemed (though he did) or how Uncle Vernon needed to put down the champagne (seriously, someone take that bottle away from him). But, instead the talk around the tables was about the centerpieces.

"Is it a long Blueberry?"

Yes, some very "in-the-know" florist was on the cusp of a new trend. She had highlighted the flower arrangements with sprigs of a very unique-looking fruit. Berry Blue Honeyberry (Lonicera caerulea var. kamchatica 'Berry Blue') had become the star of the wedding.

Honeyberry is relatively new on the scene in America, though it's been around for a while. It is just now beginning to catch on in home gardens. It is a sweet but tangy fruit with a flavor like wild blueberries and currants. They are great eaten fresh out of hand, but they are fantastic when made into jam. (Want to be the star at the farmer's market - hint, hint?)

It is native to parts of Siberia - yes, THAT Siberia where winters are colder than cold. If it can survive there, you know that it will make it in your northern garden without batting an eye.

The pretty plants have small cream-colored flowers in the spring and nice flat-green leaves through the fall. They ripen in early summer, a full two weeks before the strawberries begin to red out.

We bet you'll be the first in your circle to have some of these, so order now before your friends beat you to it. (They need a pollinator, so order one of Berry Blue's sister plants, too, like Tundra Honeyberry.) Just like those centerpieces, you'll be the talk of the town!