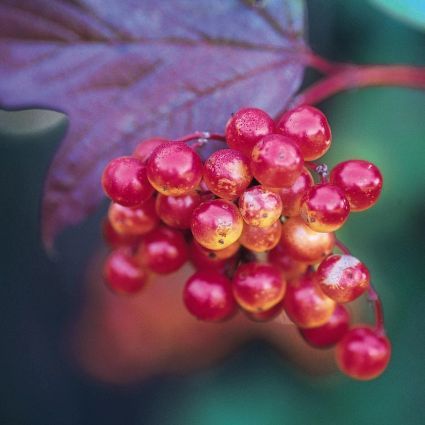 Viburnum trilobum
Be the first to review this product
As low as $146.56 Regular Price $187.90
In stock
SKU
PFY-4912
Details
More Information
Reviews

American Cranberrybush is a deciduous shrub that (although not related to the true cranberry commercially grown for food), provides both ornamental interest and an edible harvest. Choose one as a specimen plant or use several as they're also effective in small masses and borders.

Your American Cranberrybush (also known as Highbush Cranberry), has a lot to offer. Round, flat flowerheads (consisting of tiny, white florets), will adorn your Cranberrybush in spring. What a delightful herald to the upcoming summer season!

The flowers later give way to clusters of red berries that decoratively dangle from the bush in autumn. The lobed, dark green leaves are reminiscent of maple leaves, and contribute to the American Cranberrybush's full, vibrant appearance. A purplish-red transition of the leaves for fall completes this remarkable shrub's list of sterling attributes.

American Cranberrybush has a spreading nature with dense foliage and a rounded habit. It has no significant disease or insect issues.

The berries are edible directly from the bush and often used in jams and jellies. They are also a particular draw for your yard's birds, as the berries tend to cling to the bush through the winter months.

American Cranberrybush prefers well-drained soils with more moisture than is average, but is a relatively hardy shrub overall. It will do well in both full sun or shade and adapts well to occasional pruning.

Overall, American Cranberrybush is an exceptional choice for a hardy shrub that presents ornamental interest, as well as providing a tasty fall treat for both yourself and your feathered friends.