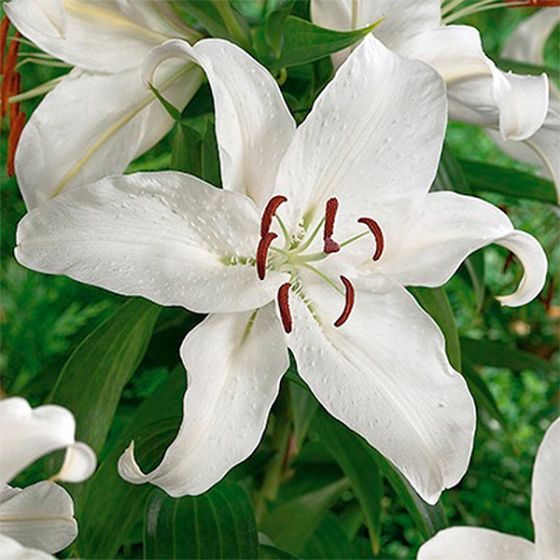 Lilium 'Casa Blanca'
Be the first to review this product
As low as $19.99
In stock
SKU
PFY-10002935
Details
More Information
Reviews

Don't forget to breathe when a Casa Blanca Lily is near. This superior lily has a habit of taking away the breath of onlookers and gardeners alike. Often considered the best white lily you can grow, the Casa Blanca is as beautiful as you can imagine. Its stunning size and form give it a polish and air of sophistication elevating this lily to a class of its own.

This swan of the lily world is large and pure white. It sets the standard for elegance and grace among lilies, and it even produces blooms that are considered huge in the lily world. The Casa Blanca Oriental Lily's superior form, size, and color didn't happen by chance. This hybrid took decades to perfect.

Casa Blanca soars above the garden at an impressive height. And while its massive blooms will likely make you feel weak in the knees, its strong stalks don't fail under the weight of its flowers. And if you do become a bit lightheaded from the Casa Blanca's beauty, it's sweet fragrance will bring you gently back to reality.

As a vigorous grower, this showy lily will sport a stalk full of blooms in summer. Use your Casa Blanca as a bright background in your garden bed where they will shine out and over your other plantings. Their glowing nature makes them a great pair with shrubs and annuals as well. Like most lilies these thrive in partial shade to full sun. If you live in a hot climate, you will want to provide yours with partial shade to help keep them hydrated, and they prefer cool soil.

Don't miss out on the romance, drama, and classic elegance of the Casa Blanca Lily. This priceless flower will become the star of the garden but don't worry, she doesn't mind sharing the spotlight. Order yours now.

We will ship your bulbs based on the correct planting time for your area.