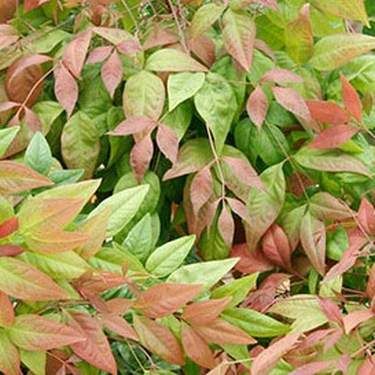 Nandina domestica 'AKA'
Be the first to review this product
As low as $76.95 Regular Price $98.65
In stock
SKU
PFY-698911
Details
More Information
Reviews

There are many reasons that Nandinas are such popular shrubs. Well, with the Blush Pink™ Nandina (Nandina domestica 'AKA' PP19916), you'll learn about several more characteristics that make this lovely plant a winner.

The Blush Pink Nandina stock was developed by Southern Living from the late-great Firepower Nandina. Like the Firepower, this cultivar transforms color beginning in spring and lasting until fall. It goes from spritely green to a medley of corals, pinks, and reds during periods of new growth. Its young leaves light up like embers on the tips of branches and often feature green veins that really set off their ravishing hues. At the height of its new growth, the Blush Pink Nandina looks perfectly sunkissed and cheerfully aglow.

This brilliant evergreen doesn't leave you hanging. It offers four seasons of interest and pairs impeccably well with a wide range of other plants. It glows as a container planting and pops as a border. Its color makes an impactful statement alongside spring bulbs or summer blooms.

To truly make your Blush Pink Nandina blush to its best ability, plant it in full sun. However, it may appreciate some relief from the hot afternoon sun in warmer zones. Because it doesn't grow as tall as many other Nandinas, it can be easier to maintain, rarely needing pruning. In fact, the Blush Pink Nandina rarely needs any maintenance from you. It thrives under most circumstances and in most soil types.

When it comes to outstanding performance and incomparable color, move over Rover, there's a new kid in town: the Blush Pink Nandina. Order yours before we sell out.