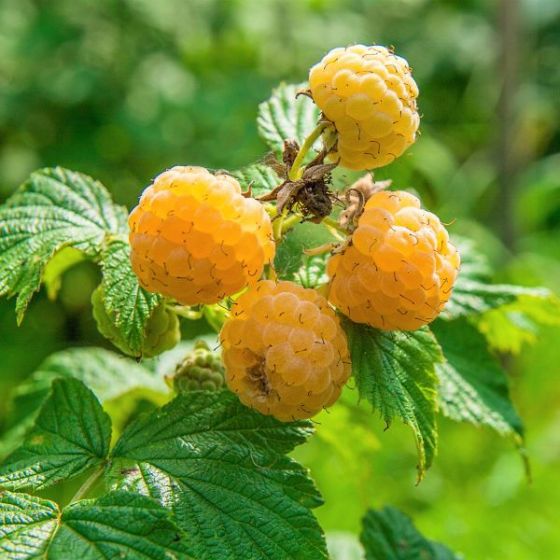 Much to our unending disappointment, no one has figured out how to make money grow on trees However they have created a gold-bearing bush! Golden Raspberries that is. The Anne Raspberry (Rubus argustus 'Anne') bush is a yellow everbearing specimen that produces the most mesmerizing golden-yellow fruit. It's almost too pretty to eat...almost.

Before getting to the most striking part of this plant, it should be mentioned that Anne Raspberry bushes cover themselves with petite white flowers in the spring in preparation for the berry production to come. Butterflies and hummingbirds will flock to your garden for a tasty snack in the spring!

Later in the season, the bush will produce large, sweet, firm berries the golden color of the late afternoon sun. Year after year, this bush will positively shine come fall.

Another fantastic quality of Anne Raspberry bushes is that they are self-pollinating! No other plant is needed to reap the benefits of a full golden harvest! Simply plant, sit back, and watch this wonderful specimen thrive!

Once you've tasted these raspberries, you'll be glad you have a whole harvest full to eat. These berries have the classic raspberry taste with a hint of apricot that is sure to leave a lasting impression! Use them in jams or salads or freeze them for a tasty snack midwinter. Of course, nothing will beat eating them fresh off the bush!

You might consider covering the bush with netting before and during harvest so you won't have to share the berries with curious and hungry birds! We can't blame them for wanting a morsel, who wouldn't?

Once the berries have all been picked, make sure to prune the fruiting canes to keep the bush producing berries at maximum potential in the years to come. Anne Raspberry's produce best when planted in well-drained soil and somewhere it can bask in the sun all day long!

Anne is an everbearing yellow-fruited Raspberry. They can produce fruit on the tips of new canes later summer into fall, and can produce another crop of fruit on the lower portion of that same cane in late spring or early summer.

Some like to grow Anne by completely cutting all of the canes down to the ground in early spring and have one, very robust crop later in summer into fall each year.

With berries as dazzling and delicious as these, you'll want to add a row or two of Anne Raspberry bushes in your garden. That way you'll have enough to pick off the bush and eat, make jam, and share with curious neighbors! Don't wait, order today!